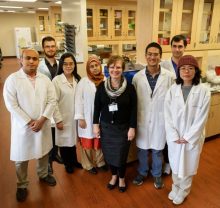 Many drug treatments for multiple sclerosis suppress the entire immune system, a big drawback that leaves patients susceptible to infection and cancer.

Now two University of Florida researchers have been awarded a $2.6 million grant by the National Institutes of Health to study the development of a vaccine in mouse models that could delay a relapse of MS, a bit like a flu or chickenpox vaccination.

A key to their work is the vaccine’s ability to narrowly target an undesirable immune response causing MS while leaving intact a patient’s general immunity to infection and disease.

The five-year grant was awarded to Dorina Avram, Ph.D., a professor of medicine and immunology in the UF College of Medicine and the director of pulmonary immunology in the Division of Pulmonary, Critical Care & Sleep Medicine; and Benjamin Keselowsky, Ph.D., an associate professor in the J. Crayton Pruitt Family Department of Biomedical Engineering.

The collaboration is based on Keselowsky’s pioneering work using the vaccine method as a treatment for Type 1 diabetes.

“We want to give hope to people with multiple sclerosis,” said Avram. “You cannot cure MS. There is no way. But the hope of this treatment would be to extend the remission period in the patient and keep the patient with an intact immune response in such a way that it can respond to infections.”

An estimated 2.5 million people worldwide and 400,000 in the United States have the disease, according to the Multiple Sclerosis Foundation. About 200 new cases are diagnosed each week in the U.S.

MS is a debilitating neurological and inflammatory disease that typically affects young adults. In patients with MS, the body’s immune cells target and destroy the myelin sheath that wraps nerve cells like the insulation on a wire. This invariably makes it difficult for the central nervous system to communicate with the rest of the body.

The key to treatment is to discourage the body’s attack on itself.

Keselowsky and Avram’s grant proposes using microscopic particles composed of the same material used to make sutures, which easily dissolve in the body and already are approved by the U.S. Food and Drug Administration. These particles then deliver specific antigens – molecules that induce a response by the immune system – and other agents that essentially reprogram the T cells’ behavior and their ability to recruit other immune cell populations.

The hoped result is that the T cells and other immune cell populations are then less likely to attack and destroy the myelin sheath protecting nerve cells.

The technique works like a therapeutic vaccine, re-educating the body’s immune response and blocking the attack.

“We are hoping to do the treatment during the remission phase of MS to extend the remission so the mouse patients do not go back into relapse, which is ideal,” Avram said.

And the antigen delivery by the microscopic particles is so specific, she said, it is believed that it will not generally suppress the immune system.

The grant, she said, also allows researchers to study the mechanism by which the vaccine operates and to determine whether it can be extended during the relapse of the disease. In addition, Avram noted the goal is to extend the vaccine treatment to patients and to other immune diseases.

The Research Project Grant, commonly called an RO1, is NIH’s oldest and most competitive. Among RO1 applications by established principal investigators to the National Institute of Allergy and Infectious Diseases – the NIH institute overseeing Avram’s grant – about 11 percent of proposals are funded.