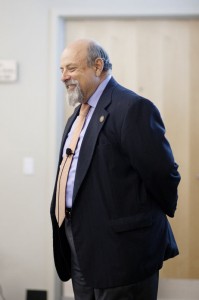 After nearly 30 years of service to the UF College of Medicine, the department of internal medicine and the Health Science Center, Richard Davidson, M.D., M.P.H., retired November 1 from his position as associate vice president for interprofessional education.

Davidson joined the faculty in 1984 from the University of North Carolina to develop a course in clinical epidemiology, which he taught for more than 25 years. In 1997, he was appointed to a position in the dean’s office where Davidson, Rhondda Waddell, Ph.D., and three additional faculty members from the colleges of Nursing and Pharmacy, developed a new course in interprofessional education.

During his career, he has served as chair of the Curriculum Committee in the College of Medicine, was named an alumni distinguished teaching professor, and directed the Community Health Scholars program, which places medical students in underserved rural and urban areas for summer projects. In 2006, he became director of interprofessional education for the Health Science Center. Four years later, he was appointed associate vice president for health affairs for interprofessional education.